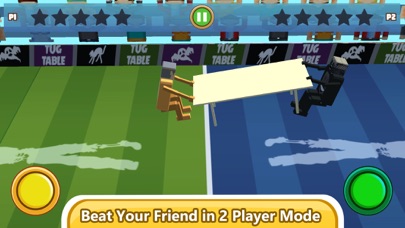 (428 reviews)
Description Release notes
Tug the Table is a simple funny competitive game. Yes, though it looks funny, it really a competitive game...Blue and red colors are the classical character pairing from a very early time. There are two little people in blue and red in color. The only things you need to do is handling one of them, and pull another one over the white line.

How to Play:-
- During the game, the player clicks the button to handle his characters jumping and make man cheerful beating.
- This is a skilled game, the players need to use all kinds of methods to pull over the opponents.
- Each round brings the winner a golden star.
- Get the five golden stars after defeating your opponent.
- Rematch to improve your skills.

Come and have a try with your friends quickly.

All you have to do is to pull your opponent over the white line.
Remember don't break your phone! It's really addictive.