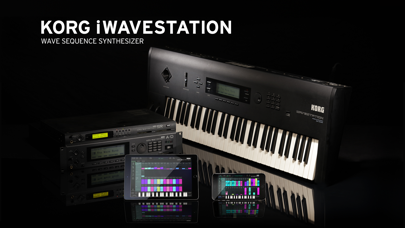 The WAVESTATION synthesizer went on sale in 1990. This instrument featured an advanced vector synthesis system which created new sounds by combining and connecting multiple waveforms; it provided a mix/morphing function that let you use a joystick to change the balance of four oscillators, and a distinctive wave sequence function that allowed you to place waveforms in a desired sequence to create sequence patterns. To this day, it continues to be considered a legendary and still-unique instrument.

Now in 2016, the WAVESTATION has been reborn as "KORG iWAVESTATION," an app for iPad/iPhone. In addition to completely reproducing the programs, it also features a renewed design that lets everyone experience the stupendous sound-shaping potential of the WAVESTATION. It features touch-based operation that's distinctive of iOS, in conjunction with a new graphic interface that allows you to visualize and edit the time-varying timbral changes that are distinctive of the WAVESTATION.

- A faithful reproduction of the original WAVESTATION sound: In addition to providing the sounds from all PCM memories of the WAVESTATION, the new iWAVESTATION also reproduces in software every detail of the parameters, based on an analysis of the original hardware circuit diagram.

- A new wave sequence view that can be graphically controlled: The iWAVESTATION, we advance another step with a graphical user interface that takes advantage of the touch operations that are a characteristic of iOS. Even more than ever, we've updated the screen design with an emphasis on creating sequences.

- 1,500 sounds, more than 700 waveforms, 55 effects, and a powerful random sequence engine: This new instrument includes a stupendous number of presets and waveforms, covering all models of the series. iWAVESTATION also provides a new random sequence function which will give you different perspectives to inspire new sounds.

- Produce music together with KORG Gadget integration: iWAVESTATION can be used in conjunction with the "KORG Gadget" music production DAW app that has won numerous awards around the world. If both apps are installed, it can be used as the "Milpitas" gadget inside the KORG Gadget app.