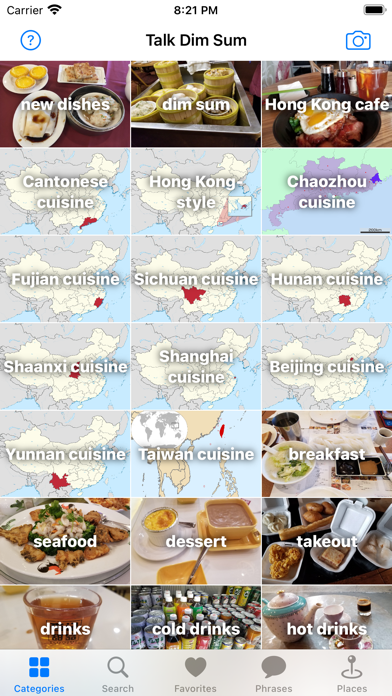 (333 reviews)
Description Release notes
Love dim sum, but don't know what to order or how to order? Bring this app, find what you like, and tap the speaker icon to hear the dish pronounced in Chinese (Cantonese or Mandarin) using iOS text-to-speech.

I made this app after visiting Hong Kong and trying to crash course learn Cantonese in the food courts. The early focus was just on dim sum and Cantonese text-to-speech and my favorite restaurants, but has since expanded (based on user tips and requests and my own interests) to more broadly cover Chinese (and Chinese-American) food and include featrures such as Mandarin (traditional and simplified), search (English and Chinese), saving favorites, AI camera recognition of dishes, speech-to-text pronunciation practice, and over two thousand restaurants around the world (but they have to serve Cantonese dim sum, at least ha gow and siu mai, and I don't have a worldwide travel budget, so if I didn't list your favorite eateries, please let me know what they are!).

If you don't hear the Chinese speech

1) check the mute switch on your iPhone and make sure it isn't on.
2) text-to-speech for a particular voice sometimes seems to require an internet connect, at least on initial use (same with speech-to-text, the microphone practice button).
2) sometimes a device will have trouble accessing the text-to-speech voice (it's the Hong Kong Chinese voice used for Accessibility in Settings), so try turning your device off and on.

Tapping the speaker icon plays back the Chinese pronunciation at half speed to help you learn. Tap the microphone icon to bring up more options, including adjusting the playback speed, switching between Cantonese and Mandarin, and practicing speaking (the speed and language settings are also in Settings).

Aside from the default speed, the speech may sound not quite natural because the app does not play back recorded speech but instead uses iOS text-to-speech functionality, which utters one character (i.e. one syllable) at a time, which may not match how an entire compound word or phrase is normally pronounced (you can hear this effect when using Siri).

Talk Dim Sum is developed with:

The dim sum icon from Stock Image Folio on Iconfinder.com.

Photos from many dim sum excursions.