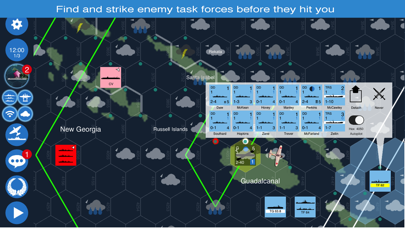 (105 reviews)
Description Release notes
**** Get the NEW Carrier Battles APP ****
Enhanced graphics, sounds & musics
11 scenarios and both sides included in the base-app
A single living code now to maintain across all platforms

Get the App bundle to migrate, contact the support if needed
This one has a frozen scope
****
Learn World War II history with a classic hex-and-counter digital wargame covering the naval-air battles of the Pacific War, in the South Pacific and Central Pacific in 1942-1943.

Review by Pocket Tactics
" Overall Carrier Battles 4 Guadalcanal is a solid WW2 naval wargame built around a great interface. It’s a realistic simulation that is accessible and fun, retaining depth while not letting the player get bogged down in menus or decisions. Fundamentally Carrier Battles succeeds because it takes the juicy technical attributes of naval games and mates it with a cracking user interface "

The duration of a game is about 1-3 hours